The world’s first electrical car and passenger ferry powered by batteries has entered service in Norway. The ferry only uses 150 kWh per route, which corresponds to three days use of electricity in a standard Norwegian household.

Built in conjunction with shipbuilder Fjellstrand, Siemens installed the complete electric propulsion system and put up charging stations with lithium-ion batteries which are charged from hydro power. With the change to battery, shipowner Norled is reducing the cost of fuel by up to 60 percent.

The Norled ferry Ampere represents a milestone on the road to operating completely emission-free ferries along Norway’s long coastline, with at least 50 other routes currently able to sustain battery-operated vessels.

Because the power grid in the region is relatively weak, Siemens and Norled decided to install three battery packs: one lithium-ion battery on board the ferry, and one at each pier to serve as a buffer. The 260-kWh-units supply electricity to the ferry while it waits. Afterward, the battery slowly recoups all of this energy from the grid until the ship comes back again to drop off passengers and recharge.

Charging stations are housed in small buildings about the size of newsstands. The ship’s onboard batteries are recharged directly from the grid at night when the ferry is not in use. Each battery pack corresponds to the effect of 1600 standard car batteries.

The Norled ferry will consume around two million kWh per year, whereas a traditional diesel ferry consumes at least one million liters of diesel a year and emits 570 tons of carbon dioxide and 15 metric tons of nitrogen oxides.

“We are proud to operate the world’s first electric ferry”, says Sigvald Breivik, Technical director of Norled. “Siemens has been a great partner in finding innovative and sustainable solutions for our environment.”

On board the ferry, Siemens installed its electric propulsion system BlueDrive PlusC. It includes a battery and steering system, thruster control for the propellers, an energy management system and an integrated alarm system. The integrated automation systems control and monitor the machineries and auxiliaries on the ferry and are connected via Profibus to all other subsystems.

“We are both optimistic and excited about this technology and how it will help shape the future of environmentally friendly maritime technology,” says Mario Azar, CEO of the Siemens Business Unit Oil & Gas and Marine. “We were pleased to apply our expertise in this field including electric propulsion systems to such a worthwhile project.”

Unlike many electric cars, the emission-free ferry was developed from the ground up. The ferry, which is 80 meters long and 20 meters wide, is driven by two electric motors, each with an output of 450 kilowatts. It is made exclusively of light aluminum rather than the steel normally used in shipbuilding. This makes the ferry only half as heavy as a conventional ferry, despite its ten ton batteries and a capacity for 360 passengers and 120 vehicles. An aluminum hull also has double the lifetime as steel hull, which leads to lower maintenance costs.

Ship owner Norled operates on the ferry link across Sognefjord between Lavik and Oppedal, Norway. The fully electric ferry travels six kilometers across the fjord 34 times a day, with each trip taking around 20 minutes.

The unique solution is a result of a competition that Ministry of Transport and Communications and the Norwegian Public Roads Administration launched in 2010. Batteries are expected to become considerably more efficient and less expensive in the next few years, which tip the scales further away from diesel as the most popular fuel source. 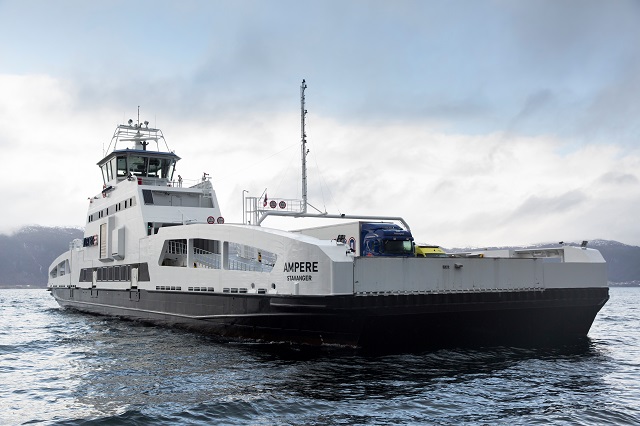 The first electric car and passenger ferry in the world, equipped by Siemens in cooperation with shipbuilder Fjellstrand, has been taken into operation. With three battery packs, one on board and one at each pier, it functions completely emission free. 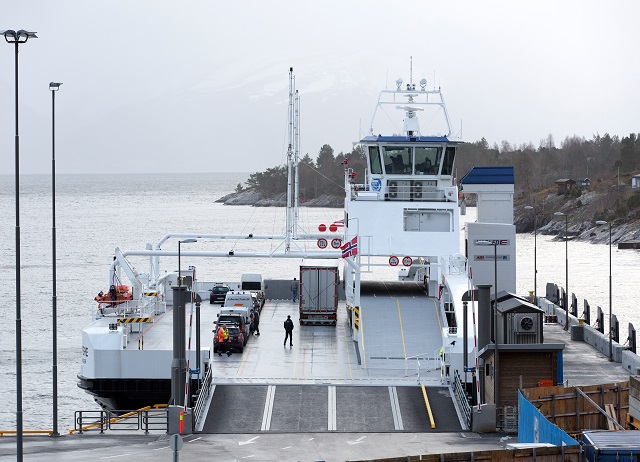 With its 80 meter length and 20 meters width, the ferry transports up to 120 cars and 360 passengers. It is made exclusively of light aluminum rather than the steel normally used in shipbuilding. This makes Ampere only half as heavy as a conventional ferry. 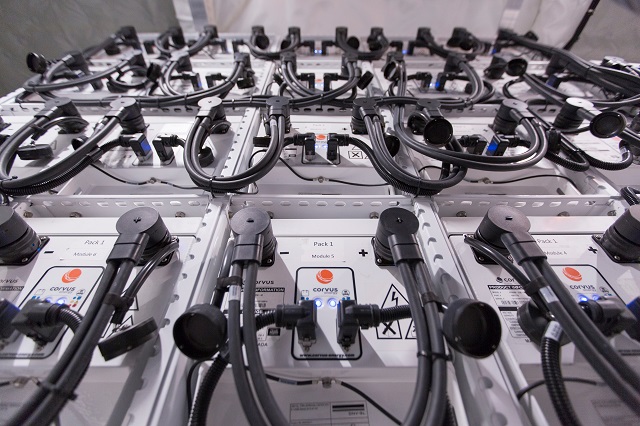 The batteries are charged from hydro power. This battery pack onboard, like the ones on each pier, corresponds to the effect of 1600 standard car batteries. The charging at each peer takes only ten minutes. 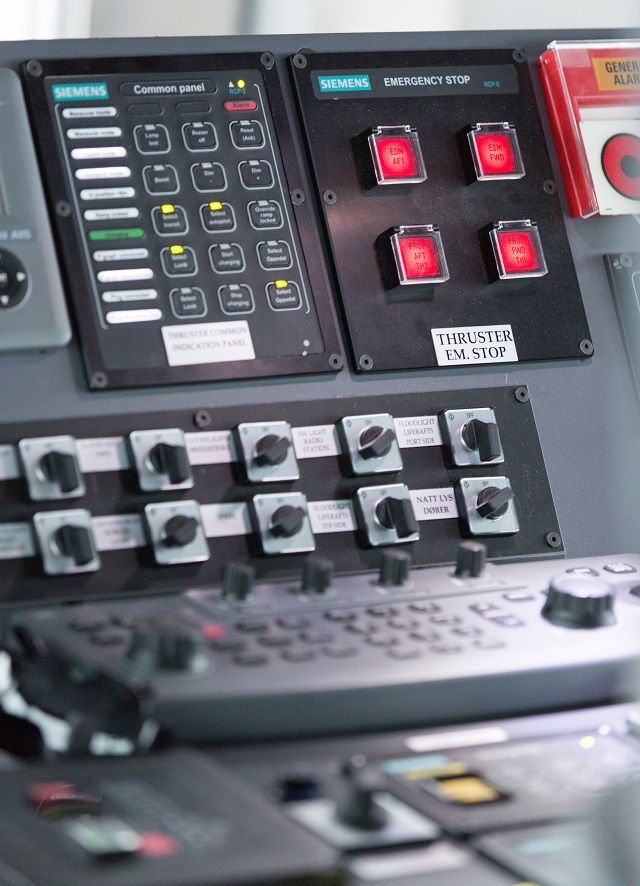 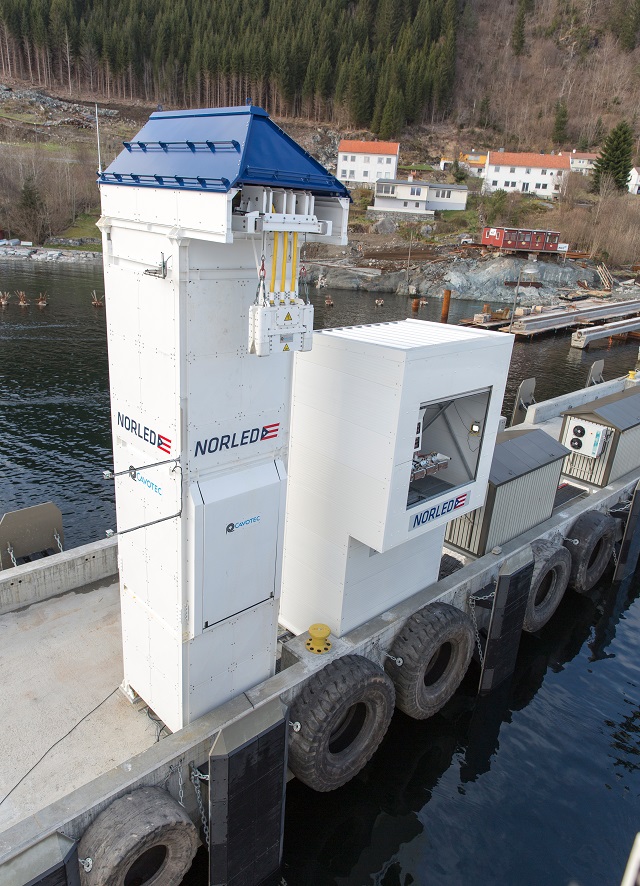 Charging stations are housed in small buildings about the size of newsstands. 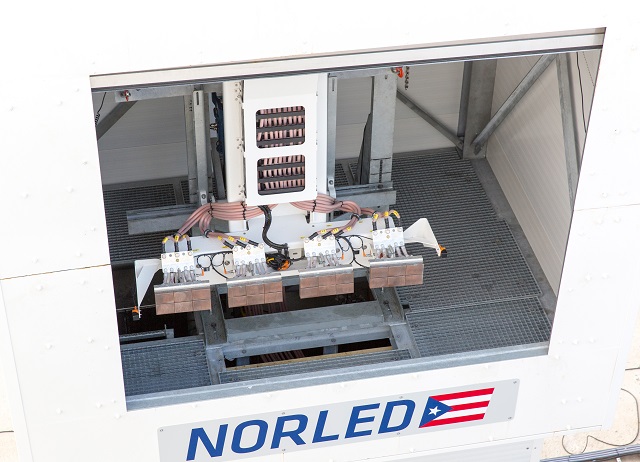 The charging system from Siemens includes a battery system, a variable frequency drive, transformers for onshore electricity and high-voltage systems, as well as software and signal system for the charging system. In addition, the compony delivered a radio link system that will steer the flow of signals between the ferry and its charging stations. 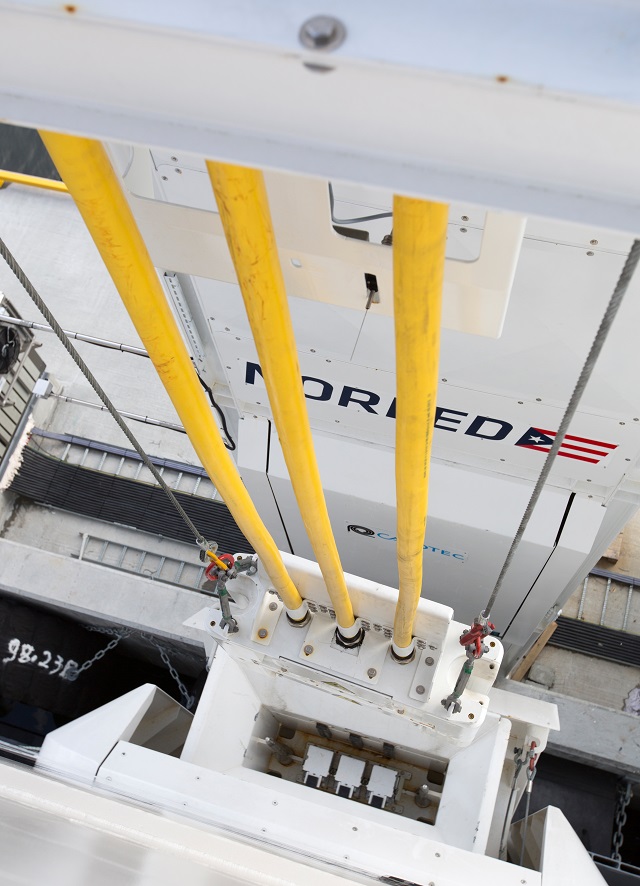 The 260-kWh battery units supply electricity to the ferry while it waits. Afterward, the battery slowly recoups all of this energy from the grid until the ship comes back again to drop off passengers and recharge. 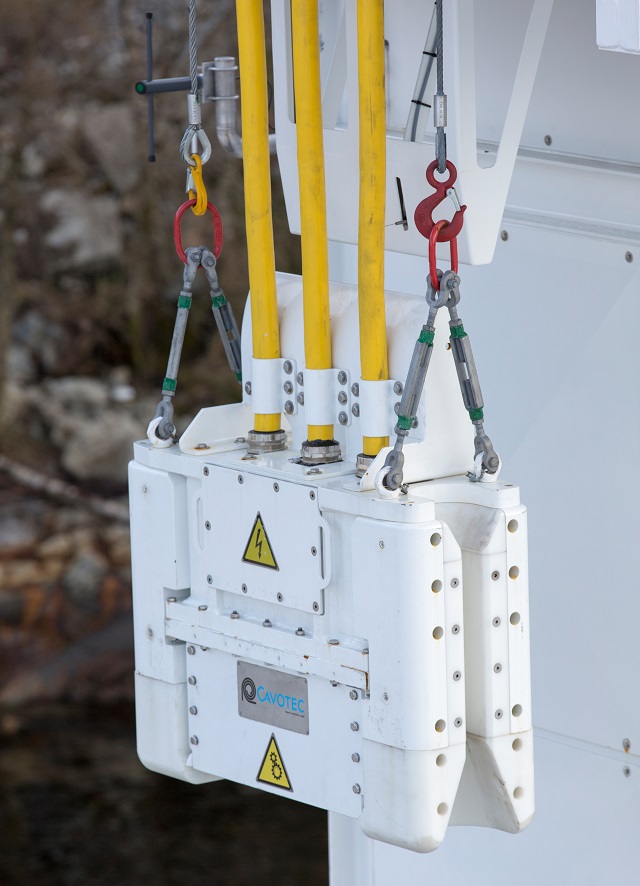 Siemens put up charging stations with lithium-ion batteries which are charged from renewable energy, namely hydro power. With the change to battery, ship owner Norled is reducing the cost of fuel by up to 60 percent.